17 reviews
Add to cart
Prev Next The drumstick tree is a significant perennial multipurpose vegetable that is widely cultivated throughout India. Each part of the plant is edible and beneficial, which is why it is dubbed the modern world's 'Miracle Tree.' Without the drumstick, no South Indian Sambar is authentic. Drumstick leaves are employed in every South Indian cuisine to prepare delectable nutritional greens and flavorful curries. The flower buds are often utilized in cooking. Generally, the drumstick tree is a low-maintenance tree that requires little water and fertilizer. It does, however, have a brittle stem, which makes it particularly vulnerable to windy winds.

If the soil around your plants is dry, it means that adequate water is not being delivered on a regular basis. If the soil is red and loomy, termites may attack. However, this will only occur at a later stage.

To avoid this, use a bio pest controller for sucking and biting pests.

The plant will become dehydrated and harmed as a result of Root Rot, which is caused by soil. This is most likely to occur if your plants have been subjected to excessive watering.

The seeds that I bought was superb and I am excited to see the fully grown plant. 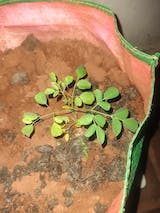 Excellent product, 100% success in germination
Thanks to seed 2 plant team